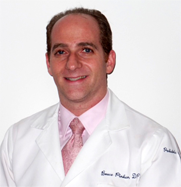 Dr. Bruce Pinker is a foot and ankle surgeon, educated at the esteemed New York College of Podiatric Medicine (NYCPM).  He takes a unique approach to feet and footwear due to his extensive training of the lower extremity. As a surgeon, he has corrected many foot deformities through his years of experience and many hours in the operating room. It became apparent to Dr. Pinker that most of his patients’ foot concerns, especially those of females, such as bunions and hammertoes, were caused by wearing improper shoes. While studying at NYCPM, Dr. Pinker completed a special internship at Eneslow and the Eneslow Pedorthic Institute in New York City.  He gained a “hands on” understanding of the foot, specifically as it relates to footwear. He also gained valuable insight into foot and ankle biomechanics, which enables him to provide helpful footwear options for his patients. Working with a full spectrum of footwear, from luxury to orthopedic to customized, Dr. Pinker gained priceless knowledge of high-quality shoes. He believes it is important for footwear to be functional, and to feel comfortable and supported. He also believes footwear should be fashionable. Hence the creation of Dr. D-LuCS. Being raised in a “fashion-conscious” family, style and design came naturally to Dr. Pinker. His father was a leader in the textile industry, and his mother, trained at the Fashion Institute of Technology, designed textiles.  As a musician and composer, Dr. Pinker has been surrounded by art throughout his life.  He has seen the need for footwear to be comfortable and stylish, as evidenced by his patients, and sees the creation of luxury comfortable shoes as a science and art form.

Upon purchasing shoes from Dr. D-LuCS, you automatically become a member of “The Elite,” a select group of women who are empowered to take on the world!

© Copyright All rights reserved for drd-lucs.com